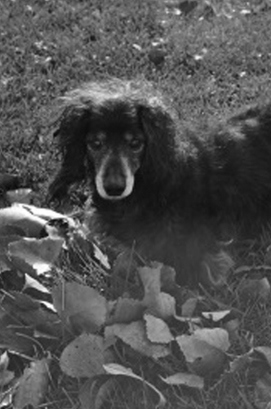 Guinness is a Senior Dog and Company Mascot at Global Healthcare Services, a nationally recognized Retained and Contingency Search Firm specializing in the recruiting and retention of Healthcare professionals.

Guinness joined GHS in 1998 as a puppy (along with his brother Ray who passed away) and has consistently been a lead dog for the Firm. Among his accomplishments, Guinness consistently greets other employees with his tail wagging, barks at the Mail Man and UPS guy, and cleans up any crumbs or treats dropped on the floor. Guinness enjoys taking naps and going for walks at lunchtime (after he eats, of course).

Educationally, Guinness attended Puppy Obedience School but failed out as the Instructor told his Owners “he’s a dachshund, he’s gonna bark”. Outside of work, Guinness enjoys sitting under the dining room table to catch scraps, squeaking toys, and eating chapsticks.

Guinness is originally from Mansfield, Ohio. He now lives with his Owners and two other little people that came along the last few years that constantly want to grab his tail.